231,000 of the 617,000 bridges in the US or 37%. That is the number of bridges currently in the United States that need repair or preservation work. It’s all part of a larger, more eye-opening problem, America’s Infrastructure is aging and is becoming more unsafe as time goes on. It’s not that the problem hasn’t gone completely unnoticed, in fact, a 500 billion dollar infrastructure package was recently passed to combat aging structures, with bridges being some of the most neglected areas nationwide. As noted by President Biden’s recent trip to Pittsburg, and witnessing the Frick Park bridge collapse that had been crumbling for over 10 years, the problem is only getting worse. According to the US Department of Transportation, the health of our bridges, in particular, has been on the decline since 2017.

One state, West Virginia, has over 21% of its bridges listed as structurally deficient, and with the national state average of deficiency increasing every year, it’s one of the largest challenges our nation has faced domestically since the Great Depression. To combat the further decline, 37 states have adopted an increase or reform to their Gas Tax since 2010, however, these measures simply aren’t enough to fully mitigate the current financial costs of repairing our nation’s bridges. To that end, new technologies such as High-Performance concrete and stronger, more structurally sound steel are being used in new bridge construction and repair with the goal of meeting a 75-year usable life. This standard, which is now part of the American Association of State Highway and Transportation Official’s plan to raise usable life up from 50 years is still being modified and perfected. The adoption of other state-of-the-art monitoring such as “living bridges” use sensors to give real-time data on the effects of corrosion, weather, traffic, and other factors to further enhance the ability of engineers to prioritize repairs and replacements as needed. To carry out those activities, each state has in place a Transportation Asset Management Plan (TAMP) that is federally required by law, with the sole purpose of analyzing all bridges within the state with a deterioration schedule. These systematic plans are data-driven and provide an outline and target for 10 years, the bridges that are structurally sound or not. Given the massive scale and cost at which these repairs or construction projects can take on, strategic asset management is a necessary part of the civil infrastructure of every state as a means of greater public safety and cost reduction.

As further investments are made into our aging bridges, the United States Department of Transportation has also outlined an immediate need for 21,000 bridges to receive prioritized selection for repair or replacement. These bridges in particular are older and have been found to be structurally inefficient to meet the demands of today’s traffic patterns, vehicle weights, as well as being in areas known to have a higher than average risk of significant weather patterns that lead to flooding, or seismic events. For cost scale, an analysis of 2,478 of these bridges meeting these requirements would come in at a staggering 1.1 billion dollar cost to taxpayers, but nothing compared to the almost 1 trillion dollar figure of repairing all of them.

So, where does the U.S. go from here?

To meet the goal of completing the overall backlog of bridge repair, an annual increase in repair budgets from $14.4 billion to $22.7 billion would be needed along with a time investment of over 50 years to conduct the repairs. Those figures don’t include the current rate of deterioration on structurally sound bridges currently. There is obviously a large overall problem that our nation is facing as we move further into the first quarter of the 21st century and no one seems to have a good answer for getting ahead of this issue. Luckily, preventative maintenance and the use of stronger, more advanced building materials have allowed our bridges to have a longer usable life even in the short term. However, as weather patterns continue to shift and change along with increased demand on our bridges to maintain the current and increased traffic numbers associated with interstate commerce and travel, how long their life is really anyone’s guess. Engineers are fighting this inevitability with incredible bridge replacement and repair innovations like:

These innovations by themselves are incredibly valuable in the effort to curtail the economic impact that bridge repair and replacement presents but are only one-half of the solution. The other is skilled labor and construction access to these projects which are at times in very inaccessible locations creating an even larger challenge. Often, bridge construction and repair sites take weeks to prepare not including the proper permitting and approvals, so this means delays and the unfortunate reality of further potential damage, traffic delays, and the like. These factors increase already astronomical repair and replacement costs, which can cause many of these projects to quickly exceed the defined budget and scope, neither of which is ideal. At Aqua Barrier®, we help ensure bridge construction and repair projects stay on time and most importantly on budget by allowing safe, dry worksites in some of the most extreme and inhospitable conditions. Using modular and rapidly deployed cofferdam solutions, uptime is ensured and allows our construction partners the ability to achieve success in worksites where traditional dewatering methods are not feasible. It’s the solution that we’ve refined and perfected over the past 25 years and why we continue to meet the needs of our clients worldwide. We invite you to contact us to see the difference an Aqua Barrier® can make in keeping your bridge construction dry, safe, and moving forward. 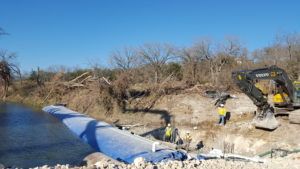