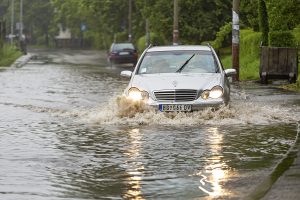 Climate change is a phenomenon that is not restricted to changes in average temperatures of various places around the country. It has also played a role in increased incidences of extreme weather conditions. These include severe hurricanes and devastating floods along the coastal regions of the Atlantic. Scientists warn that severe flooding that took place once in 500 years now has a probability of taking place once every 24 years.

Scientists have reached this conclusion by comparing modern day floods with those that took placed in prehistoric times. They could do so with the help of carbon dating and the data on hurricanes that is available today. On the basis of these comparisons, they feel that not only have floods of today become more severe than floods and hurricanes of old times but they are also likely to become much more severe in times to come.

Risk of flooding in New York City and nearby areas of Atlantic coast has increased considerably in the last millennium or so. This is because of a sea level that has been rising continuously and increased in the number and intensity of storms that have been hitting the area in recent times. Accompanying these storms is unusually high rain fall. This high rain fall contributes to the intensity of floods that have been striking the coastal regions of Atlantic Ocean. Mean height of floods has increased by nearly 4 feet in the last 1000 years. The fact that ocean levels have also increased considerably in the same time means that the floods of today and future are much more severe than old times. Scientists feel that climate change is not the only reason why floods of such high intensity are occurring with such high frequency in the coastal regions. There are other human activities that play a significant role in these floods. These include cutting of upstream forests that have the ability to soak lots of water. Destruction of these forests by human beings has led to higher frequency of deadly floods as there are no more sponges to soak up loads of moisture.

Storms of very high intensity that earlier took place once in nearly 7 generations are today taking place twice within the same generation. These findings are indeed frightening but they also tell us that it is time to take collective action. In fact, it is findings like these that will force the governments around the world to come up with new and innovative methods to combat climate change.